The route is rarely used due to the fact that the trailhead is very remote and tough to reach. It begins north of Kilimanjaro in a deeply forested area near the Kenyan border. Rongai route normally takes 6 days and is fairly easy compared to some of the others, but of course none of the Kilimanjaro routes is truly easy.

The Main problem with Rongai is that it is visually quite uninteresting and focused on a section of the Kilimanjaro Forest that is severely impacted by deforestation and exotic tree plantations, so although it is remote, it is also not by any means the most attractive trail, besides which it intersects with Marangu so the illusion of isolation is brief. Day 4 of Rongai ends at Kibo Hut, where it intersects with Marangu Route for its final two days. Day 5 of Rongai is the long and brutal summit day, which begins at midnight of Day 4 after only about 4 hours sleep. After reaching the Uhuru Summit in mid-morning on Day 5, Rongai climbers descend on Marangu Route so the final night on the mountain is spent at the often-crowded Horombo Hut complex. 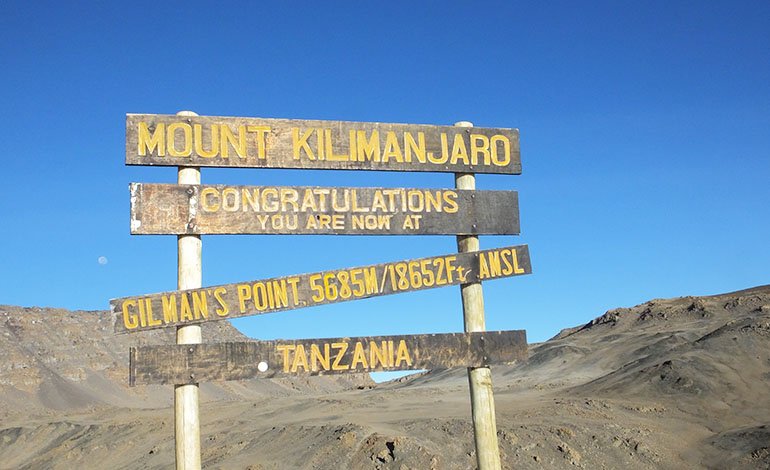 Day one
Day one

Estimated Distance: 11km Elevation Change: +1189m Hiking Time: 6 hours Habitat: Montane Forest After breakfast in Arusha/Moshi hotel, depart to the Rongai Gate near the Kenya border. After registering at the gate, begin your climb to Uhuru Peak, the roof of Africa. During the first day, hike through forests where you may see and hear wildlife. Eat lunch on the trail before continuing to the first camp. Rongai ascends via the less forested northern side of the mountain. The Rongai Route is one of the least crowded routes on Kilimanjaro because of the long drive to the gate. The Rongai trail is thought to have the best chance of viewing wildlife.

Distance: 7km Elevation Change: +340m Hiking Time: 4 hours Habitat: Moorlands This day is an acclimatization day, allowing you to hike in the beginning of the day and rest in the afternoon and evening. The hike is relatively short but steep. The Mawenzi Tarn campsite is situated below Mawenzi Peak and offers stunning views of both Mawenzi and Kibo.

Distance: 7km Elevation Change: +400m Hiking Time: 4-5 hours Habitat: Alpine desert On this day cross the lunar landscape of the saddle before arrive at the final camp. Kibo Camp is situated directly below the Kibo cone, giving you views of your final destination-Uhuru Peak.

(3,720m/12,200ft) Distance: 7km ascent; 23km descent Elevation Change: +1295m -2795m Hiking time: 8h to Uhuru, 6h to Horombo Habitat: Stone screen / ice-cap summit Wake up around midnight; begin the final ascent to Uhuru Peak, the highest point in Africa. For the next six hours, hike by the light of your flashlight. The ascent to the crater rim is the most challenging part of the entire trek. The trail is very steep until you reach the crater rim at Gilman's Point. The hike from Gilman's to Uhuru Peak is a gradual climb and, as far as hikes go, not very difficult. The altitude, however, makes the hike long and tiring. The crater rim hike takes approximately two hours. Upon reaching Uhuru, take photos of your guide and group at the peak before beginning the descent to Horombo Hut.

Distance: 15km Elevation Change: -1270m Hiking Time: 3-4 hours Distance: Approximately 27 km Habitat: Montane Forest After breakfast, finish the trek with a descent to Marangu Gate. Your last hike on Kilimanjaro is a beautiful one, passing through Kilimanjaro's cloud forest. Watch your step during the descent, as the trail can be slippery. Sopai Safaris Vehicles will be waiting at Marangu Gate to take you back to Arusha in our affiliated Hotels.